In the previous post — Animation with Turtle Graphics — I explained that animation is simply simulation, making stuff appear real. You create the appearance of real and continuous movement by quickly showing a series of slightly-different images. I then introduced the idea of creating animations with Python’s turtle graphics module. In this post, I’ll use a simple example to explain how to use animation as well as user interaction and data to create a game with turtle graphics.

Note: Turtle graphics isn’t the best tool for creating great games (use e.g. Unity for that), but it is an excellent tool for learning about how games fundamentally work.

It’s possible for a video game to simply be a toy, for undirected play. It would then be called a sandbox-style game, as, just like sand in a sandbox or sandpit, it invites you into an activity, but doesn’t direct you in any way. But most games usually do direct the player towards some goal or outcome. They do this through the gameplay, which is how the player plays and experiences the game as a result of the combination of all the different elements of the game, like the graphics, the story that the game tells, the game mechanics or rules, the interaction that the game allows, the goals to try to achieve, etc.

In this post, I’ll explain how to use turtle to simulate a 2-player Pong style game, where the goal is to keep a bouncing ball from going past you, and to get it to go past the opposing player instead: 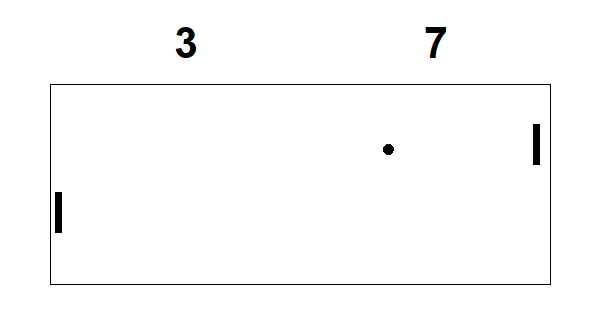 In a two-part follow-up post I’ve written the code that implements the design, but it’s important to first understand how to approach the different aspects of such a game, which is what I’ll explain below.

To create the game, we need to simulate the following:

When using turtle graphics to implement this game, it’s easiest to use a number of different turtles for the different elements:

As the ball must appear to be constantly moving, we repeatedly need to display the screen as a frame many times a second, with the ball having moved a small amount between each frame or time-step — in other words, we’re simply animating the movement of the ball, as explained in the previous post. We can keep track of the direction and speed of the ball’s movement by giving that movement a horizontal and vertical component, which we keep track of with a variable or two. At each time-step, if the ball doesn’t appear to collide with anything, we simply add the horizontal component to the ball’s horizontal position, and add the vertical component to the ball’s vertical position to move the ball to its new position.

If a player pushes a designated key, we also move their paddle a small amount in the up or down direction as appropriate — that is, unless it’s not allowed to move further up or down, and then we simply ignore that key-press by not doing anything about it so that the paddle stays put at the bottom or top of the playing field.

That’s all there is to it: implementing the simple algorithm gives you a Pong-style game.

I hope it has become clear how a game goes about simulating an understandable, interactive system, illustrated to the user through animated graphics. By simply changing the underlying data and corresponding graphics (and sound or whatever else) at the appropriate time, it gives the impression of a real system. In the next post I show exactly how to implement the algorithm above using Python’s turtle graphics, but why not first give it a go yourself?